This is a case of a 49 - year old, female who presented with seeing distorted images and loss of depth perception on her right eye.

Visual Acuity was 20/20-2 on the right and 20/20 on the left eye. External and anterior segment examination of both eyes were unremarkable.

Upon examination of the retina on the right, we noted a whitish lesion temporal to the disc, measuring approximately three-disc diameters in size.

The retina exam of the left eye was unremarkable. The patient already had fluorescein angiography, ocular coherence tomography of the macula and a B – Scan examination done in another institution that showed results consistent with an osteoma.

The etiology of such tumor remains unknown, however, factors such as inflammation, trauma, hormonal state, calcium metabolism, environment, and heredity have been proposed.

Further research and discussion of these disease entities may help us further understand and ultimately treat the condition, in order to provide our patients with the best quality of life possible. 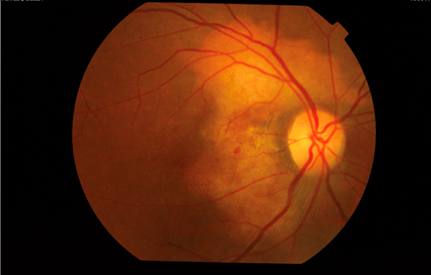 Colored photo of the right eye showing a whitish lesion measuring approximately three-disc diameters in size and located temporal to the disc.

Macular OCT Scan of the right eye pre-treatment showing the presence of a subretinal fluid in the area of the lesion. Post-treatment, there is resolution of the previously noted subretinal fluid. 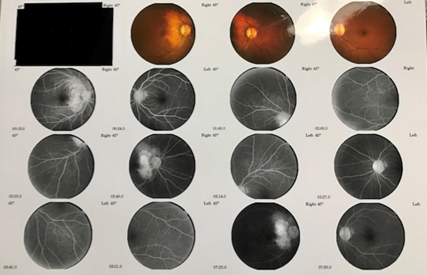 FA shows a hyperfluorescent lesion that did not increase in size or intensity towards the late phase in the right eye. The left eye is unremarkable. 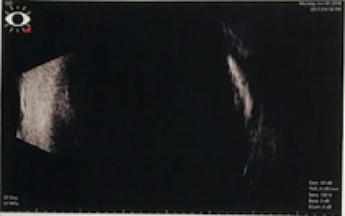 B – Scan of the right eye showed a hyperechoic lesion posteriorly with posterior shadowing.